The first registered liver foundation in Myanmar, which focuses on awareness raising, prevention, training and policy advocacy for liver-related illnesses including Hepatitis infections.

Hepatitis B vaccinations have been ramped up around the country over the past 10 months under a dual Liver Foundation and Ministry of Health project.

The inoculation scheme, which began in August 2015, has so far covered around 1.5 million people. An end date has not yet been decided, but the program aims for comprehensive coverage, according to the Liver Foundation. “We will inoculate everybody in the country against hepatitis B together with the Ministry of Health,” said Dr Khin Pyone Kyi, president of the Liver Foundation, Myanmar. A nationwide survey conducted in 2015 showed that nearly 5 million people in Myanmar suffer from a form of the hepatitis viruses. It was estimated that about 3.3 million people suffer from hepatitis B, which is transmitted through bodily fluids and attacks the liver, possibly leading to serious, chronic disease like scarring and liver cancer. The Liver Foundation vaccine drive is open to everyone in the country, although the national guidelines recommend infants are inoculated. “We have no age limitation for providing the vaccine in our program, except newborn babies. The program aims to cover the whole country. People who want to get the hepatitis B vaccine can contact our foundation,” said Dr Khin Pyone Kyi. The foundation is also educating local charities about hepatitis B because those infected with the disease can pass the infection on to others through blood or bodily fluids, Dr Khin Pyone Kyi said. “Hepatitis B can be transmitted easily from person to person. The disease can also be transmitted from mother to baby. Hepatitis B infection can happen at any age. Therefore, we aim to control and protect people against the disease,” she said. Last year’s survey found that the highest prevalence of HB infection was 12.4 percent in Yangon Region and the lowest was 3.3pc in Magwe Region. The high point of hepatitis B infection, 7.36pc, was found in the 30-39 age group. The national program includes a pentavalent inoculation administered to infants are the age of two months. The program, which was launched in 2012, is supported by the GAVI Alliance and has so far covered around 75 percent of the country.

Let’s answer the call of our duty. There was a poor, humble doctor who left his family and three young children in Monywa, a small city in upper Burma, to pursue a post-graduate medical training in the capital Yangon. The living expenses were too high for him to support his family in the big city with his meager monthly salary of 1500 Kyats, equivalent to $60. But his love for medicine did not stop him from learning and teaching without extra earnings. There were medical students, interns, and post-graduate doctors who came and studied under his guidance and teachings. Despite being cash strapped, he would buy books for studying. As said by Desiderius Erasmus, “[when] I get a little money I buy books, and if any is left, I buy food and clothes.” Those who knew Dr. Than Sitt can see exactly how this quote applies to him. He was an advocate for patients’ rights and medical professionals’ ethics.

This moral standard kept him at length from a comfortable life but nothing short of pursuing his thirst for learning and teaching medicine. He had a passion for keeping up-to-date with the never-ending advancements of medical science and the expansion of medical technology and patient care in Myanmar. His dream was fulfilled when he was selected for training at the Royal College of Physicians in United Kingdom. He brought home advanced medical knowledge and skills and he specialized in hepatology. He was not content with leading the Hepatology Department. He set his sight on eradicating an evil threat to millions of lives: Viral Hepatitis, a precursor of hepatocellular carcinoma.The trigger for the eradication of viral hepatitis B and C was set off after witnessing thousands of viral hepatitis patients, mostly from rural areas, succumb to hepatocellular carcinoma. Their mode of transmission was very common in the under-developed world: improper sterilization of needles and medical equipment. He knew that the education, awareness of the danger of transmission and consequences of the disease, and training of medical professions to implement a simple yet crucial measure of sterile technique would be fundamental steps in the fight against the Viral Hepatitis B and C. He set-up the Liver Foundation and laid the ground and guidelines for education, counseling, early diagnosis by a cost-sharing lab, vaccination and cost sharing treatments, community mobilization, and training of medical staff and research. The task was daunting and the ambition was paramount. He led the Liver Foundation and materialized the ambition to activities through fund raising, seminars, news media and social networks locally in collaboration with World Hepatitis Alliance, World Health Organization Regional Team, and pharmaceutical companies. Show More

He initiated the campaign by traveling tirelessly on road trips seven days a week to give endless talks for health education and to perform free lab tests and vaccination across the country. His next plan was to open the first clinic which would be the nucleus for expansion through primary care providers in rural areas. The strategy was to set up the clinics throughout Myanmar so that early detection, vaccination and treatment could be covered in every corner. The unyielding quest for the eradication of viral hepatitis to eliminate preventable causes of hepatocellular carcinoma turned into an unexpected cruel fate in January 2016. A nonsmoking Saya Than was diagnosed with adenocarcinoma of lung stage IV out of blue. Why? Why at this age? Why this lethal disease? Why at this stage of the disease? Upon learning of his fatal diagnosis, he only remarked in a calm manner, “This is my final year.” He bravely dealt with the deadly disease at an advanced stage. One day he was leading the fight against liver cancer, the next he was ambushed by lung cancer. One day he was a healer treating and comforting the dying patients, the next he was a dying patient fighting for his life. He endured through the grizzly treatment as any other patients with malignancy would. Pain. Panting. Pyrexia. Prostration. He never complained a bit. Instead, he felt sorry for those who took care of him and comforted him. To quote Samuel Beckett, “I can’t go on. I’ll go on.” He was resolved to survive one more day so that he could help the patients and the poor one more day. At the beginning of the fight while taking Gefitinib, he tried to go for a retreat at the meditation center. When the disease progressed with bouts of hemoptysis and pneumonia as Gefitinib failed in April, he went on to Crizotinib. When he felt a bit of “improvement,” it was a break in the progression instead; yet, he still returned to the clinic and saw patients three days a week. The cancer never relented its attacks. He never stopped fighting. He asked for systemic chemotherapy (Premetrexed and Carboplatin) when Crizotinib failed. Two days prior to his last breath, he was barely able to whisper as his right lung collapsed from the tumor and filled with recurrent effusion. With a breeze of air, he acknowledged the merits of his loved ones with “Sadhu Sadhu Sadhu.” On his death bed, he asked Dr. Ye Win Maung, who had been taking care of Saya Than as if he was his own father, “How is the Liver Foundation doing? How much does it cost for the treatment of each Hep B patient per month?” On August 2nd, 2016, Professor Than Sitt passed away.Dr. Than Sitt was a humble one-eyed man with a huge ambition and a far-sighted vision. He was a people’s person. He was a doctors’ doctor. He was a teachers’ teacher. He was a hero for the heroes who are in the profession of taking care of the sick. The ill fate took away his body but not his spirit. His body had reduced to ash due to one terrible malignancy, but his vision and mission to conquer the other terrible malignancy will live on. Hero begets heroes. He inspired leaders and foot soldiers in the fight for preventable diseases. He laid a foundation and formatted the pathway for the Liver Foundation to continue the fight. He alarmed us to a wakeup call to celebrate life, to learn and practice Dharma, and to cherish the service to humanity. We all are travelers with one destiny. We all have our choices to make and priorities to set. I would like to share a quote by Sayamagyi Professor Hnin Yee: “[It] is surprising that more of us don’t devote our lives, or at least some portion of our time, to serving people in need. We don’t have to wait for a tragedy to come together, as a community or a nation, and offer ourselves to the world in service. Sometimes it’s easier, of course, to respond to an event that has just happened rather than to ongoing problems like homelessness, poverty, and illness. But the truth of this world is that there is always someone in need of our best efforts to rally a group of helpers and healers. Maybe we feel discouraged because these smaller acts and gestures don’t generate the same kind of energy and attention from other people as heroic acts in the face of immediate disaster, and perhaps an effort to change this is one way to change the world. The more we promote, applaud, and actively inspire humanitarian efforts in the world, the more others will be drawn to this kind of work. We might pay a little less attention to sports and celebrity gossip and a little more attention to those everyday heroes who devote their lives to alleviating suffering. The more attention we pay, the more we will inspire others and ourselves to be of service in a world that greatly needs our attention.”

The vision of Dr. Than Sitt will continue to be an unwavering mission. His dream of eradicating the viral hepatitis will be materialized by the believers and achievers. The opening of the first clinic, the Than-Sitt Charity Clinic, has been initiated under the leadership of Dr. Khin Pyone Kyi, the president of Myanmar Liver Foundation. He whispered the last call. Let’s answer the call of our duty. 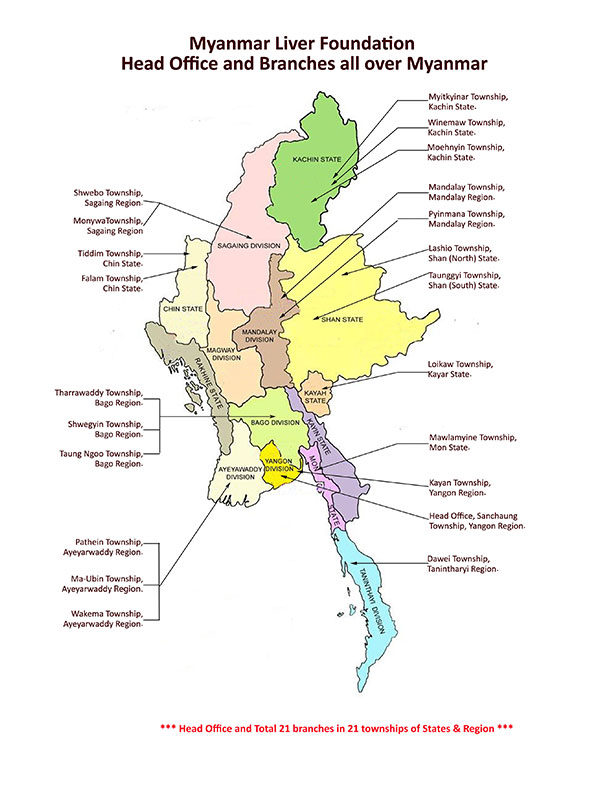 Branches of Myanmar Liver Foundation all over Myanmar 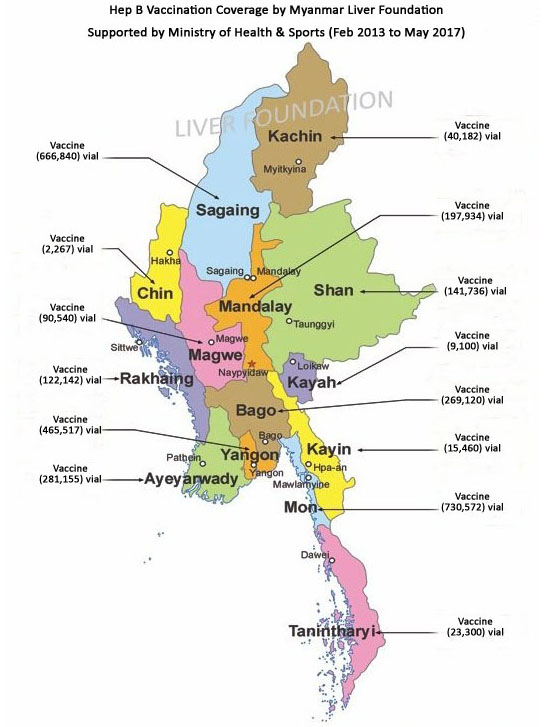